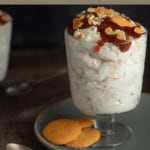 When you need dessert in a flash, this plum fool is incredibly simple to prepare. Just fold pureed plums into whipped cream and top with crushed cookies.

A fool is someone who doesn’t appreciate dessert. It’s also the name of the easiest dessert I’ve ever made – a simple blend of cooked fruit and whipped cream. In this recipe, I use fresh plums.

But first, who are these non-dessert people and what’s wrong with them, exactly? They say genetics play a role in our preferences of sweet over salty, along with a number of other scientific factors. Or maybe it’s just because making dessert seems like extra work that no one has time for.

I get that. While I love baking, let’s be honest, it’s typically a commitment. Though, in emergencies, I’ve thrown together oatmeal chocolate chip cookies fast enough that my wife has hardly noticed I even turned on the oven. And yes, dessert emergencies do exist.

The good thing is that not all desserts require much of your time and attention. A pudding, for instance, is a classic dessert that needs just one pan and no special equipment or skills. Slightly more complicated are brownies, where in most cases, you can prep them in just one bowl. By the way, you don’t need to buy mixes for either, because you probably already have what you need in your pantry. Mixes are not the secret to quick desserts.

The fool, though, is even easier than pudding or brownies. It’s an English dessert dating back hundreds of years. Traditionally, it was made by cooking and pureeing fruit and then folding that into custard. Gooseberries were the original fruit of choice for a fool. Today, freshly whipped cream is used in place of the custard and any fruit may be used.

Light, refreshing, and without the need to heat up the oven, a fool is a good warm weather dessert. Although those days may be behind us for the season, a fool is delicious any time of year. You don't have to use just plums. Just about any fruit to make a fool, so the season doesn’t need to dictate when you make one.

Last week I went plum picking at Champlain Orchards. While I love all of their fruits, their European plums may be my favorite. Deep purple and blue, these small plums are ready for picking at the end of summer and I’ve been dreaming about them for months. They make fantastic preserves, but with that already accomplished and plenty of plums still ripening by the day, I knew they would be excellent for a plum fool. Turns out, I also had some heavy cream in the fridge that needed to be used up anyway.

In addition to fruit and heavy cream, you just need some maple syrup and cookies to crush up for serving.

Start by chopping up the plums. Then, put the fruit in a small pan with a splash of maple syrup to cook until soft. This will only take a few minutes. When done, let the plums cool.

Meanwhile, whip up some cream. No, whipped cream from a can won’t do in a fool. You need to make the real stuff. Sweeten it with a little more maple syrup, if you like. Then you simply fold the fruit into the whipped cream.

Honestly, that’s about all it takes. You can literally have this ready in 15 minutes. When my fruit has been especially soft and ripe, I’ve even skipped the cooking part and just folded the pureed fruit right into the cream. I also don’t think it’s necessary to puree the fruit after cooking, but if you prefer you could certainly do so. If you want to get fancy, serve the fool in clear glasses to show off the streaks of fruit within the cream. Then crush up cookies, such as ginger snaps, and sprinkle those over top.

That’s about all there is to make a fool. I told you it was easy. It hardly even needs a recipe. But if you want to make it more interesting, here are a few ideas:

Although it takes just minutes to prepare, you will need either a stand or hand mixer to make this plum fool. Or, if you have some other means of making whipped cream, such as one of these gadgets, that will work, too. A blender, immersion or traditional, also helps to puree the plums. Though, if you had to, you could skip pureeing and keep the fruit chunky.

This plum fool should keep for two or three days in the fridge. But honestly, it's best enjoyed the same day it's made. Wait until serving before topping with the cookie crumbs, as those will go soft if left hanging out on the fool for too long.

This is an instance where understanding the concept of folding ingredients together is critical. You don't want to overmix the plums into the whipped cream when making the fool. You only want to fold the pureed plums just enough so that they're combined. Stirring the two together with too much force will create a deflated mess. Here's a helpful video if you want to see the folding technique in action.

When you need dessert in a flash, this plum fool is incredibly simple to prepare. Just fold pureed plums into whipped cream and top with crushed cookies.

Chop the plums into small pieces. Add them to a small pan with a splash of maple syrup. Cook until the fruit is soft and the liquid is syrupy, about 10 minutes over medium heat. When soft and syrupy, transfer to a blender and puree until smooth. Let cool completely.

Meanwhile, using a mixer, whip the cream with a splash of maple syrup until stiff peaks form. Taste and add more maple, if needed.

Fold almost all of the cooled fruit puree into the whipped cream, then divide it up into serving dishes or glasses. Spoon the remaining puree over the glasses. Crush up the cookies and sprinkle over the fool. Serve immediately or keep refrigerated until ready to eat.

Make this dessert even easier by skipping the pureeing process. Just use the cooked fruit as it is.