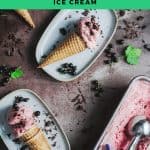 A perfect balance of creamy and tart, this blackcurrant ice cream uses all the tricks to make an irresistible treat using a tangy summer fruit.

Homemade ice cream is one of those things that when you make it for the first time you're blown away by how good it is. It's creamy, fresh, and tastes like a rich frozen custard. With your first bite, you suddenly realize that the stuff in stores will never do again. There's no going back. You'll now just have to make your own quart of ice cream each week for the rest of your life.

Of course, that's not entirely practical. Homemade ice cream is wonderful and easy to accomplish when using an ice cream maker. Yet, it does take a little time and planning. Most folks only need a basic, inexpensive maker that involves churning the ice cream in a bowl that you freeze in advance.

I have an attachment bowl for my KitchenAid mixer. It's always been simple and easy to use. Before this, I had one from Cuisinart for many years that also did the job just fine. They both use the same concept.

I probably only make ice cream a handful of times each year, but each time is entirely worth the effort. It's mostly an effort of patience. If you're looking for a quick homemade ice cream recipe that doesn't require an ice cream maker, I would have to tell you that what you're looking for doesn't exist. The recipes that make such claims will leave you with inferior ice cream that's not creamy and is likely full of ice crystals.

My best suggestion is to blend some frozen bananas and add some flavorings, which I find satisfying enough in a pinch.

This recipe is all about creating a creamy ice cream. I've used all the strategies I could find to develop a recipe that won't result in crunchy ice crystals. No one wants icy ice cream and it's a common problem with many homemade ice cream recipes. But just follow all of the tips I've included in this post and you won't have to worry.

If patience and an ice cream maker are the first two necessities for good homemade ice cream, I'd argue that the third is egg yolks. There are recipes out there that don't include eggs and they are fine. But eggs serve an important role. They add fat, which freezes at a softer consistency, and they serve as a binder or emulsifier for the other ingredients. In other words, most of the creaminess of ice cream is thanks to eggs.

Believe it or not, they also help make the ice cream slower to melt. Read more about the importance of eggs in ice cream. I no longer make ice cream without eggs or with low-fat milk or cream. They simply end up too icy and not creamy. If you want an icy dessert, try my Blackcurrant and Sour Cherry Granita, instead.

Two other important ingredients worth a shout-out: the honey and the Crème de cassis. I include both of these ingredients because they also help to limit that icy texture.

Of course, the star of this blackcurrant ice cream is the blackcurrants. This was our most successful year growing blackcurrants in our garden and we picked more than four pounds from our one plant!

The majority are currently infusing vodka to make homemade Crème de cassis, but what remained went into this ice cream. I think their extreme tartness works so well to balance the sweet cream aspect of this ice cream. They prevent the ice cream from tasting too rich and sweet.

Here's everything you'll need for this blackcurrant ice cream recipe:

Start by blending up the blackcurrants with the milk. Then strain out the seeds. Blackcurrants have a ton of seeds and if not removed, will make the ice cream weirdly crunchy.

You then cook the blackcurrant milk with the cream, honey, sugar, salt, and Crème de cassis until almost boiling.

Then you slowly combine the yolks into the cream. You add a little of the cream into the yolks while whisking. Then this mixture goes into the pan and it keeps cooking a bit more.

After the mixture cools in the fridge for some time, it can then be added to your ice cream maker and churned until thick. Don't forget to toss in the chocolate.

Your blackcurrant ice cream is pretty much complete. Now just spread it out in a cold metal tin and freeze until it's as firm as you prefer.

Ice cream maker: As I've mentioned, an ice cream maker is essential. Don't try and make this recipe without one.
Thermometer: While you can probably get away without a thermometer in this recipe, you might as well get yourself one anyway, they're always handy for cooking and baking.
Metal tin: From my research on ice cream making, the metal tin, something like a loaf pan, helps the ice cream to freeze more evenly. Absolutely essential here? No, but I do suggest using something of a similar size and shape that will allow the ice cream to spread out a bit.

If you're not eating this blackcurrant ice cream immediately, which is crazy, transfer it from the tin to a freezer-friendly container with a tight seal. I imagine it would be good for up to a couple of months, but my homemade ice cream has never lasted more than a week.

Let the ice cream base mixture cool completely. Don't try and use it before it's reached at least 40 degrees F or your ice cream won't freeze well while churning. My suggestion is to make the ice cream mixture the day or night before you want to eat the ice cream. That way it will have more than enough time to cool down.

If you want to make an extra special dessert, pair this blackcurrant ice cream with my Triple Ginger Gingersnaps recipe and make your own ice cream sandwiches!

A perfect balance of creamy and tart, this blackcurrant ice cream uses all the tricks to make an irresistible treat using a tangy summer fruit.

Wash and pick any stems from the blackcurrants. Transfer them to a blender with the milk. Blend until no solids remain, and then strain through a fine-mesh strainer to remove the seeds.

In a medium pan, combine the blackcurrant and milk mixture, the cream, salt, honey, sugar, and Crème de cassis. Heat over medium-high, whisking often, until just before it starts to boil or about 175 degrees. Turn off the heat for a minute.

In a small bowl, whisk the egg yolks until blended. Add a ladle full of the hot milk and cream mixture into the yolks. Whisk continuously for about 20 seconds to prevent the yolks from having a chance to cook. Pour this back into the pan, put the heat back on, and continue cooking until the mixture has thickened and reached about 180 degrees.

Transfer the ice cream mixture to the fridge to cool completely. This will take a few hours, but you could do it the day or night before you're ready to make the ice cream. Meanwhile, put your ice cream maker base in the freezer (if not already there) and a metal bread loaf tin.

When the ice cream base has cooled, get your ice cream maker ready to go. Turn it on and pour in the base mixture. Let churn about 20-25 minutes or until the directions for your maker tell you a typical recipe. When the ice cream has thickened up, and it's nearly done, add in the chocolate chunks.

If you like soft-serve ice cream, you could enjoy the ice cream immediately. Otherwise, scoop it into that frozen tin, cover with plastic wrap and freeze at least two hours for a hard ice cream consistency. The longer you freeze it, the harder the ice cream will be.

You can use the base of this recipe and the various tips to create different flavors of ice cream other than blackcurrant. Try raspberry, blueberry, or strawberry, though the options are limitless.