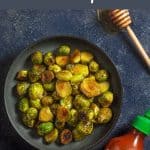 Sweet, spicy and so very simple, you'll love these crispy honey sriracha brussels sprouts as an easy side dish or an addicting app to share around the table.

This was our best year ever for growing Brussels sprouts. Don't ask me what we did right this time around, I'm just going to chalk it up to a good location that had the right balance of nutrients.

It was fun to gift a few friends the enormous stalks with all of the sprouts still on them. We traveled to Connecticut a few weeks ago and loaded them up in the back of the car, which was pretty funny. Although, as my wife noted, Brussels sprouts do have a bit of an odor - something you don't really notice until you're stuck in a confined space with them for several hours. Now you know.

With all of our Brussels sprouts, I've had the chance to try out some different recipes. What I found is that it's actually a little challenging to roast them to that perfect crispy state without overcooking. No one likes a mushy Brussels sprout!

I have a few tips about how to avoid that below. Hey, even if they're a little overdone, no one will care when you toss them in this addicting sweet and spicy sauce.

I believe Brussels sprouts are truly best enjoyed when kept simple (unlike this), so that's what I did here with these honey sriracha sprouts. Just a few ingredients and no surprises. If you're worried these might be too spicy for you, I think the honey really cuts the heat and they end up well balanced. But feel free to reduce the amount of sriracha to your liking.

Before you get your sprouts in the oven or start mixing that sweet and spicy honey sriracha sauce, you need to clean, trim, and halve the Brussels sprouts.

This is important for two reasons. First, and this should be reason enough alone, sometimes you can find small worms in Brussels sprouts. I know, that's gross, but it's also the reality of eating food grown without chemical pesticides. Luckily, with a good rinse, you can get any bugs off without a problem.

Second, you want to make sure your sprouts are all about the same size so that they cook in the same amount of time. As I was reminded when taking my sprouts off of the stalks, you can get some massive ones towards the bottom of the plant and significantly smaller ones towards the top. So by trimming and halving larger sprouts, you can make them much closer in size. Don't forget to slice off the very bottoms of the sprouts, as they're a bit tough.

Once they're trimmed and halved, spread them out on a baking sheet lined with parchment paper. Don't crowd your pan, though. If needed, use two pans.

When the oven is preheated, coat the sprouts in olive oil and salt and get them in there to roast for about 15 minutes. Meanwhile, you whisk the honey and sriracha together in a bowl.

After 15 minutes, take the sheets out of the oven and drizzle the Brussels sprouts with the honey sriracha mixture. Toss them around and bake for another 15 minutes or until crispy but not mushy. Just give one a try to see if what you think.

As I said, the key here is to prevent mushy Brussels sprouts and achieve that nice crispy, crunchy, and just slightly charred balance. So here are a few thoughts on how to make that happen.

A few thoughts on how you can change up this recipe.

Enjoy these honey sriracha Brussels sprouts within 2-3 days. They will become soft after being stored in the fridge, so they really are best the day they're made. For reheating, I'd use the oven or a pan on the stove instead of the microwave.

🍴 Other easy side dishes to try

Sweet, spicy, and so very simple, you'll love these crispy honey sriracha brussels sprouts as an easy side dish or an addicting app to share around the table.

Preheat the oven to 425 degrees.

Rinse, trim and halve Brussels sprouts, as needed. Put the sprouts in a bowl and toss with olive oil and salt. Line one or two baking sheets with parchment paper and spread out the sprouts so that they're not crowded in the pan.

Put the sprouts in the oven to bake for 15 minutes. As they bake, whisk together the sriracha and honey in a small bowl until combined. Take the sprouts out of the oven after 15 minutes and drizzle over the sauce. Toss to coat then put the sprouts back in the oven for another 10 minutes, or until tender and crispy but not mushy. Serve warm or at room temperature.

Start tasting the sprouts for doneness at 25 minutes and decide whether they need further cooking from there. Don't let them overcook before testing!