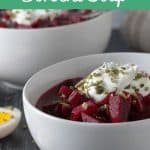 A satisfying Eastern European soup with beets, potatoes, carrots, and cabbage. This vegetarian borscht is quick and filling for a cold winter's night.

Winter in Eastern Europe is cold, and hearty storage vegetables such as cabbage, potatoes, and beets are common staples this time of year. Soups make good use of these crops, not to mention a means of warming up from the cold. Perhaps you’ve heard of borscht — a beet-based soup with many variations, not to mention spellings — and maybe, like me, you never actually tried it.

Borscht is often thought to be a Russian soup, but it’s also popular with Ukrainians, Poles, and Lithuanians. In some cultures, borscht is served after funerals, while in others, it’s enjoyed as part of a Christmas Eve dinner.

I’m happy I finally gave borscht a chance, as this soup is just my thing. Borscht is not just a beet soup, it’s a sour soup, and I love everything sour. The beets offer a natural sweetness that is balanced by the broth's sourness, due to red wine vinegar and lemon juice. Then you top the soup with sour cream, which adds a little more tanginess to the mix.

Though I love beets, I have to admit that beet soup never sounded that appealing. But I had plenty of beets and everything on hand to put the soup together, so I gave it a try. I grow my own beets, but not enough to last me through winter. Luckily, they're always easy to find at our wonderful winter farmers' market from many of our farmers.

In addition to beets, some of the other main ingredients in this soup include:

You start by sauteing the root vegetables in butter, then add broth, cabbage, and some salt. It all simmers together for 20 minutes or so until tender. Then add in the vinegar and lemon juice for the perfect sour flavor. Top with sour cream and scallions before serving.

You can store this vegetarian borscht in the fridge for up to four days.

I think this soup gets better the longer it has to sit and meld. So, if you can make it a few hours in advance or even the day before, I think that's when it will be at its best.

Eggs: I served hard-boiled eggs on the side, as is common in Eastern Europe.

Meat: While this is a vegetarian borscht recipe, borscht can include meat such as beef or pork. Sometimes the meat may be smoked. Sometimes fish is used instead. The more I researched borscht, the more I found that there's no one way to make it.

This straightforward, unfancy borscht recipe is a good starting point if you're new to this soup and Russian food. If you love beets, give my Red Flannel Tempeh Hash a try. Or if you just need another comforting soup, check out my Celery Leek Soup.

A satisfying Eastern European soup with beets, potatoes, carrots, and cabbage. This vegetarian borscht is quick and filling for a cold winter's night.

Melt the butter over medium heat in a large pot. Add the garlic, beets, potatoes, and carrot, and sauté for 10 minutes. Add in the broth, cabbage, and half of the salt and bring to a boil. Start with just a ½ teaspoon of the salt, and add more as needed. This will depend on the saltiness of your broth.

Lower the heat and simmer, partially covered to avoid splattering beet liquid all over your kitchen. Cook for 20 minutes or until the vegetables are tender.

Add the vinegar and lemon juice and taste. Add more vinegar, lemon juice, or salt as you like. Serve hot with a dollop of sour cream and top with chopped scallions or chives.

One Pan Cardamom Chicken and Rice »