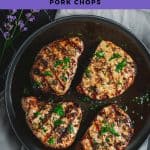 This recipe combines the earthy flavors of sage and lavender and proves that lavender isn't just for sweets and drinks. Fire up your grill and enjoy this quick summer dinner.

I'm always interested in unexpected ideas for cooking with the herbs and flowers in my garden. You can see this throughout many of the recipes I post here, such as mint pesto pasta, lemon balm lemonade, lilac tea, rosemary lemon cake, and chamomile cookies.

I like to develop unusual recipes for what we can grow at home or pick up from the farmers' market. Because most of us already know how to make a basil pesto or a cup of chamomile tea. But I think we can always use new creative ideas. The same ones get old fast. Zucchini, I'm looking at you. If I have to eat another loaf of zucchini bread this summer, I'm going to flip.

This week I wanted to use lavender. But I wanted to use it in something savory. Most often, floral flavors like lavender are limited to sweets and drinks. And that makes sense. It's easy for floral flavors to work well when they're the star of the show and the only tangible counterpart is sweetness. Though, as I recently found out, chocolate is also excellent with lavender.

It's worth noting that not all lavender is the same. Some, such as the French variety, tend to have more intense floral notes. On the other hand, English lavender has more pepperiness to it, and it's why it is the more common culinary lavender.

When used sparingly, lavender can add an appealing aromatic note to savory cooking, especially poultry and pork. I'm not sure how long it was before I realized that one of the dried herb blends I often use with soups, stews, and roast chicken - herbs de Provence - contains lavender. It blends in so well with woody and earthy herbs like rosemary, sage, and oregano, that it almost goes unnoticed. There's just a hint, and that's all you need.

That's why when I went out to pick some of my fresh English lavender, I decided to grab some sage while I was at it. I don't use much sage in the summer, though I love it, and my plants are looking fantastic this year.

See the recipe card below for specific quantities.

Finely chop the lavender and sage then mix them with a grill seasoning blend to make a quick rub for the pork chops. I like to grill boneless pork chops because they cook up super quickly. All you have to do is make a vegetable side or two, and you've got dinner in half an hour.

It's a simple blend that I recommend making a small jar of your own so you have it throughout the grilling season. But if you buy a jar, check the ingredients list. There are many varieties out there with slightly different flavorings, and you want to make sure you'll like everything.

After grilling, finish the chops off by coating them with a simple maple balsamic glaze that you simmer in a pan. Coat the pork chops in the glaze and throw on a touch more of the fresh sage and lavender. You can see in my photo that I also threw on some chopped parsley, but that's up to you.

Hint: The pork chops start by cooking over a direct flame and then finish over indirect heat. The indirect part is important to prevent overcooking. Dry pork chops are not enjoyable.

Dried Lavender - If you don't have access to fresh lavender, you can still give this recipe a try. I've found that dried lavender works just as well. It's just more intense than fresh, so cut the amount you use in half. (If you really had to, you could probably also get away with using dried sage in this recipe, though sometimes it can be a bit woody and bland tasting.)
Bone-in Pork Chops- An easy substitution. Just increase the cooking time.
Other herbs - Rosemary or thyme could work in place of the sage.

Chicken - I think replacing the pork chops with chicken thighs would also be delicious with the sage and lavender combo in this recipe. Let me know if you give it a try!

Considering that these are grilled pork chops, I recommend using a grill. But if you don't have one, you can also use a grill pan. It's what I used to "grill" food for years when I lived in small apartments without an outdoor grill space.

Did you know in 2011 the USDA changed their recommended cooking temperature for pork? It used to be 160 degrees, but it's now 145. No wonder why I have not so fond memories of almost choking on tough pork chops as a kid.

This recipe combines the earthy flavors of sage and lavender and proves that lavender isn't just for sweets and drinks. Fire up your grill and enjoy these herby pork chops in no time!

Preheat your grill with a medium-high flame or to about 450 degrees.

Pat the pork chops dry with paper towels. In a small bowl, combine half of the sage and lavender, the grill seasoning, and olive oil. Spread this mixture over both sides of the pork chops. Place the chops onto the hot grill and cook, covered, for about 3 minutes per side.

In a small pan, heat the broth, maple syrup, and balsamic. Bring to a rapid simmer and cook about 5 minutes or until thickened and reduced to about half. Stir in the remaining sage and lavender. Pour the glaze over the pork chops, sprinkle with the salt and serve with your choice of sides.

Be careful not to overcook the pork chops. The recommended temperature from the USDA is now 145 degrees.