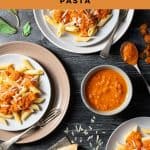 What can you substitute for vodka in penne alla vodka? Try white rum! Penne alla rum is the tasty alternative to the classic penne alla vodka recipe using rum, tomatoes, basil, and cream.

I couldn't help but think of my grandfather when I went to make penne alla vodka, realized we were out of vodka, and decided to swap it for white rum.

My grandfather did not believe in breaking tradition. He would never use rum in place of vodka. Not to mention, his mother was from Italy, and to him, a homemade tomato sauce must simmer on the stove for hours. He said that was the only way you do it. Basically, he would hate everything about this sauce. But hey, you have to break from tradition once in a while.

Now that I think of it, I seem to like non-traditional pasta dishes, like my Pumpkin Pasta with Sage and Sausage and Green Pea Pasta with Mint or Creamy Corn Pasta. But, hey. They all taste good and that's all that matters, right?

The origins of the original dish, penne alla vodka, are up for debate. It may have come from a restaurant in Bologna, Italy. Or perhaps Moscow. Maybe even here in America. Is it an authentic Italian dish? Unclear. It's not all that unlike other Italian dishes. Wherever it came from it gained popularity in the 1980s. Read more about its mysterious origins.

The question is: does vodka sauce really need vodka? No, it doesn't. Whether you use vodka or rum in the sauce, the purpose is the same. The alcohol enhances and melds the other flavors of the sauce. The alcohol shouldn't stand out on its own. If you’ve only ever had vodka sauce, who knows, maybe you’ll be surprised by this recipe. Honestly, I was too. I've made it with rum several times now and it tastes great every time!

According to other sources, you could sub some water and lemon juice in place of the vodka, though personally, I think that would just water down the overall flavor.

For this recipe you'll need:

You start by boiling your pasta in a big pot of salted water. Then chop the garlic and onion and saute them in olive oil with the red pepper.

Keep an eye on the pot and stir occasionally for a few minutes.

Then you'll add in the rum, broth, and tomatoes and bring it all to a simmer. It won't take long now.

Eventually, you'll add in the cream and let it meld together for a few minutes. Don't worry if it looks like the cream has separated at first. After a couple of minutes of simmering, it will come together.

Then it's ready to toss with the pasta and top with basil and Parmesan. Easy!

Store the pasta and sauce separately in the fridge, rinsing the pasta if it's sticking. The sauce will keep for about three or four days but since it contains cream, I don't recommend freezing it. Though you could always freeze it without the cream and add it upon reheating. On the other hand, plain pasta does freeze well.

What can I substitute for vodka in penne alla vodka? How about for the rum?

As I talk about in this post, white rum makes a good substitute for vodka in penne alla vodka. But if you have neither vodka nor white rum, I'd suggest using additional vegetable broth and a splash of lemon juice.

No, I don't think you can. However, that doesn't mean that all of the alcohol burns off during cooking. That's a common misconception. Based on findings from a study from the USDA, I'd guess that at least 40% of the alcohol remains in this dish by the time you eat it, which would be a bit less than ½ cup. Divide that by 4 servings, and you could estimate that each serving contains 1 ounce of alcohol. Combined with the pasta and other ingredients, I think it's highly unlikely you'd get drunk off of this pasta. But if you're looking to avoid alcohol, then you should consider another recipe or using vegetable broth and lemon juice.

What does adding alcohol to pasta do?

The alcohol is there to add some depth of flavor and a little bite to the other ingredients. The goal is not to taste the alcohol. If you can taste it in a recipe like this, I'd say you used too much.

What can you substitute for vodka in penne alla vodka? Try white rum! Penne alla rum is the tasty alternative to the classic penne alla vodka recipe using rum, tomatoes, basil, and cream.

If you want a smoother sauce, especially if your crushed tomatoes are a little chunky, use a stick blender to blend the sauce before adding in the cream.

Make sure you use white rum, just nothing too pricey. Dark or spiced rums wouldn't work well here.