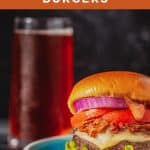 Inspired by the classic sandwich, this peanut butter and jelly burger is sweet and savory in all the right ways with a peanut butter mayo and addicting bacon jam.

We think of the peanut butter and jelly sandwich as a simple kids’ lunch. Yet this wasn’t always the case. In the late 1800s, peanut butter was considered a high-end condiment for serving with celery, cheese, and crackers at tea time. The first mention of pairing peanut butter with jelly on bread wasn’t until 1901 in the Boston Cooking School Magazine. However, the concept didn’t catch on until sometime later.

As the 1900s progressed, three critical developments in the birth of the peanut butter and jelly sandwich occurred.

While I don’t eat as many peanut butter and jelly sandwiches, I still enjoy the combination (as long as it isn’t grape jelly). I think it’s the pairing of the creamy fat in the peanut butter and the sweetness of the jelly's fruit that makes the two work so well together.

That said, when I saw a peanut butter burger on a menu a few months ago, I skeptically gave it a try. Surprised to find how good the burger was, I couldn't resist the idea of making my own version at home. Just don't expect anything resembling the lunchbox sandwich.

The thing about this peanut butter and jelly burger is that it's not quite what it seems. For starters, there is no jelly. It's a sweet bacon jam made with:

And the peanut butter is actually a peanut butter flavored mayonnaise. It may sound odd, but it works. Trust me. For this, all you need is:

Finally, there's the burger. That includes:

Let's talk about this bacon jam.

You start by crisping up chopped bacon in a pan. When cooked, scoop out the bacon, leaving behind the fat, and cook the onions, garlic, apples, maple syrup, vinegar, and spices until everything is softened. Then stir the bacon back in. Almost forgot - there's a splash of bourbon thrown in, confirming this is definitely not your kid's pb&j.

Though the jam has some sweetness to it, it's not overpowering. Instead, between the caramelized onions and smoky bacon, there’s a depth of flavor that condiments such as ketchup utterly lack. Though it comes out a bit chunky, a quick run through a blender will create an irresistibly smooth jam in seconds. Though I actually like it chunky, kind of like how I like my peanut butter.

Speaking of, while the jam cooks make the mayo. It couldn't be easier. Just whisk together equal parts peanut butter and mayonnaise. When I first wrote this recipe, I said to make your own mayonnaise, but it was too many steps and ingredients. And in this case, I don't think it's worth the effort anyway since it's mixed with peanut butter.

Finally, you shape and cook the burgers. When they're done, layer on your toppings, bacon jam, peanut butter mayo and you have yourself a one-of-a-kind peanut butter and jelly burger.

If you're not eating all four burgers at the time of preparing, I suggest waiting to cook the burgers until you are ready to eat them. You can shape the patties ahead, but reheated burgers are always dried out. Meanwhile, store the bacon jam, mayo, and toppings separately until ready to use.

You should be able to store everything for up to three days, though it will depend on the freshness of your ground meat.

You know, while you're at it, you may want to consider doubling the bacon jam and having extra for other uses. What are some uses for bacon jam, you ask? Spread it onto a grilled cheese, serve it with cheese and crackers, stir it into potato salad, eat it with eggs and toast for breakfast. Or, let's be honest, you can just enjoy it on its own.

For another peanut butter flavored dish, try my Tofu Spring Rolls with Peanut Dipping Sauce. Or if you're looking for other beef recipes, try my Red Wine Beef Stew.

Inspired by the classic sandwich, this peanut butter and jelly burger is sweet and savory in all the right ways with a peanut butter mayo and addicting bacon jam.

for the bacon jam:

for the peanut butter mayo:

Place the chopped bacon in a large pan over medium-high heat. Cook, about 10 minutes or until the bacon is crispy. When crisp, use a slotted spoon to remove the bacon to a paper towel-lined plate. Add the onion to the bacon fat left behind in the pan. When softened, after cooking for about 5 or so minutes, add the remaining jam ingredients. Lower the heat and gently simmer for about 15 more minutes, stirring often.

While the jam cooks, whisk the peanut butter and mayo until smooth. Set aside. When the jam has reduced, remove from the heat and stir the bacon back in. You can keep the jam chunky or briefly pulse in a food processor or blender.

In a large bowl, combine the ground meat with the Worcestershire sauce and salt. Use your hands to shape the meat into four patties.

Heat a large cast-iron pan over medium-high heat. Add a tablespoon of the butter to the pan and when melted, place the buns in the pan, sliced side down—toast for a couple of minutes.

Assemble your peanut butter and jelly burgers by spreading the peanut butter mayo on both sides of each bun. Place the burgers on the bottom buns, top with the bacon jam and other toppings.

You can also cook the burgers on the grill. Skip the extra butter and coat your grill grates with oil to prevent sticking.