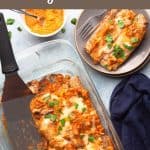 Reinvent your Thanksgiving dinner with these easy leftover turkey enchiladas featuring turkey, pumpkin puree, and cranberry sauce. They're also delicious any time of year for a comforting dish with a bit of Thanksgiving inspiration.

We all know that the best part of Thanksgiving is after the family has gone, the dishes are washed, and you can finally lounge around in sweatpants and dive into the leftovers.

The first round or two is nice, but after that, we need something more than sandwiches. Soups are an excellent choice because they're easy to incorporate a variety of leftovers, and those extra items that maybe you bought too many of and need to use up - like onions, sweet potatoes, and herbs.

Even when I'm not cooking the Thanksgiving dinner, I tend to make a few of the traditional dishes after the holiday so I can have some of what I like and then enjoy the leftovers. I like to be creative and reinvent leftovers into different meals.

It’s like a puzzle seeing how to combine leftovers to form something new and interesting and not just a rehash of the same flavors and textures. Mini turkey pot pies and stuffing fritters are a couple of my biggest leftover successes. Though one year a frittata with one too many ingredients turned out to be a big fail. So it's not always a win.

This year, since I wasn't cooking the holiday dinner, I roasted up some turkey thighs simply for the purpose of having leftovers. I love cranberry sauce, so I made some of that, too. And guess what? These leftover turkey enchiladas are a winner. I wouldn't be sharing them if not, right? (No seriously, I wouldn't.)

They're filled with turkey meat and cranberry sauce, along with plenty of cheddar cheese. They're wrapped up in Vermont Tortilla Company corn tortillas and then covered in a spicy-sweet pumpkin sauce.

What I like about these enchiladas is that they taste like something completely new. While they only incorporate two leftovers - turkey and cranberry sauce - they have a Thanksgiving feeling to them while still feeling like you're enjoying something fresh.

Even if it's not Thanksgiving, I think these enchiladas are delicious any time of year. Improvise with the leftovers you do have and make them your own!

I love to use Vermont Tortilla Company organic corn tortillas. They're made here in Vermont and include just three ingredients, including locally sourced organic corn. I was excited to learn about a small business making tortillas in our rural New England state and was hooked ever since I found them at my local food co-op a few years ago.

What's even cooler, is that they use a traditional ancient process called nixtamalization where the corn is soaked in a lime solution that removes the skin of the kernel. The result is a softer and more nutritious dough than most other corn tortillas in the United States.

Start by tossing the turkey, cheese, and cranberry sauce together in a bowl.

Then prepare the pumpkin enchilada sauce. Cook the onions, garlic, pepper, and ginger in olive oil until tender. Mix in the broth, pumpkin, nutmeg, cinnamon and after a couple of minutes. After simmering for a few minutes, add in some cream.

Spread some of this sauce across the bottom of a baking dish.

Assemble the enchiladas by spooning filling onto each tortilla.

Roll up the tortillas and place the assembled enchiladas into your baking dish on top of the sauce.

Spread the remaining pumpkin enchilada sauce across the top of the turkey enchiladas.

Sprinkle the remaining cheese over the enchiladas.

Bake the enchiladas in a 350-degree oven for about 30 minutes until the cheese is melted and everything is heated through. Top with some chopped parsley and serve!

Here are a few substitutions to change up this leftover turkey enchilada recipe. Let me know in the comments below if you give any of these a try.

Store these enchiladas covered in the fridge for 2-3 days. You can also store a dish full of them, unbaked, in the freezer for up to 3 months. Just add 10 minutes or so to your baking time.

🍳 Other Recipes to Try

Reinvent your Thanksgiving dinner with these easy leftover turkey enchiladas featuring turkey, pumpkin puree, and cranberry sauce. They're also delicious any time of year for a comforting dish with a bit of Thanksgiving inspiration.

Preheat the oven to 350 degrees F.

Prep the ingredients by chopping the onion, garlic, ginger, sage, and peppers.

In a bowl, stir together the turkey, cranberry sauce, and 1 cup of cheese to combine. Set aside.

Heat the olive oil over medium-high heat in a pan. Add the onion, garlic, ginger, sage, and peppers and saute until the onions are tender, about 10 minutes. Pour in the broth and pumpkin puree and simmer, stirring often, over low heat until a sauce-like consistency has formed. Then stir in the cream, cinnamon, nutmeg, salt, and pepper and turn off the heat.

Spread a ladle full of the pumpkin sauce across the bottom of a large baking dish. Divide the filling among 12 corn tortillas then roll them up as tight as you can. Place them seam side down in the baking dish on top of the sauce.

Spoon the remaining sauce over the enchiladas in the baking dish. Top with the remaining cheese and bake in the preheated oven for about 30 minutes or until heated through and the cheese is melted. Serve warm topped with the parsley.