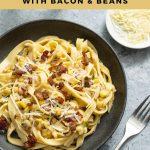 An easy creamy corn pasta recipe with white beans, bacon, and corn. A satisfying and quick weeknight dinner made with common pantry ingredients.

At the end of nearly every summer, my wife and I buy a bushel of corn from a local Vermont farm. Have you ever bought anything by the bushel before? It's fun and you can often get a good deal by buying a greater quantity.

A bushel ends up being about 50 or so ears of corn. The folks at Grabowski Farm load up a sack for us at the farmers market and I drag it over to the car to bring home.

No, we don't have a big barbecue with 50 friends. Instead, we blanch the cobs in boiling water, slice off the corn kernels, divide them into two cup portions and freeze in air-tight bags.

It may sound like a lot of work, but it only takes us a couple of hours or so and it's entirely worth the effort knowing that we have such good corn tucked away for months to come. We freeze other vegetables and fruits throughout the year and stock the chest freezer for these dreary winter months.

I'm convinced that the chest freezer is one of the best investments we ever made. If you garden or want to enjoy fresh local produce year-round, it's worth getting yourself one. Freezing is quicker and easier than canning and pickling.

Somehow, I've never posted a corn recipe on the blog. Not sure how that's possible. Though, we most often use corn for simple side dishes, add it to cornbread or make corn chowder. Nothing interesting enough to write about, really.

I love corn chowder, but all the cream and milk is a bit much to have it part of our regular meal rotation. For this recipe, I wanted to take some of the flavors of chowder and see if they would work with pasta.

I wasn't expecting much, but it was so good I made it again just a few days later. It's creamy without all the dairy (aside from a little Parmesan) and it's such a simple and filling meal.

Although this creamy corn pasta is mostly made with pantry staples, it feels richer and even a bit fancier than the effort and ingredients that go into making it.

I think a noodle like fettuccine or linguine works well here, but use whatever you prefer. Canned beans are fine, or if you have the extra time, you can definitely cook some dried beans in advance.

🍲 How to make Creamy Corn Pasta

The first step is to chop and cook the bacon. As it cooks, it releases fat, which we'll use in place of oil or butter while also benefitting from its savory flavor. Meanwhile, start a pot of salted water to boil, then cook the pasta according to the package directions.

Once the bacon is crispy, remove it from the pan with a slotted spoon, leaving the fat behind. Add the onions, garlic, and spices. Saute these for 7 minutes or so until tender. Then pour in the broth.

Bring the liquid to a simmer and stir in the beans and corn.

Hint: For extra creaminess, (kind of the whole appeal of this creamy corn pasta recipe) I like to grab a potato masher and mash up the beans and corn a little. I think it helps add some extra substance to the sauce.

Allow everything to simmer for 5 minutes or until everything is heated through and the liquid has reduced. Then stir in the Parmesan, pasta and parsley.

Use tongs to toss everything together and let cook another couple of minutes to coat the pasta in the sauce. When done, serve topped with the bacon and additional parsley and cheese.

If you try any of these variations, leave a comment below to let others know how it turned out.

Store any leftovers in an airtight container in the fridge for up to three days. The creamy corn pasta will thicken up and get less creamy in the fridge, so add a little water to thin out the sauce when reheating. Better yet, if you know you'll have leftovers, save a cup of the pasta cooking water and use that for reheating.

An easy creamy corn pasta recipe with white beans, bacon, and corn. A satisfying and quick weeknight dinner made with common pantry ingredients.

Frozen corn and canned beans work just fine in this recipe. It's all about keeping it simple.