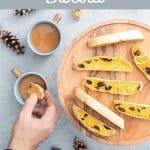 These cherry limoncello biscotti are sweet, tart, and crispy thanks to limoncello, fresh lemon zest, and plenty of dried cherries. A perfect snack for your afternoon cup of coffee or tea.

Biscotti are my kind of cookie. Is there another that crunches so beautifully? I don't think so. Another that pairs so perfectly with a cup of hot tea or coffee? Definitely not.

I'm not a fan of soft, cakey cookies. If you want cake, have cake. Every cookie should have at least a little crunch to it, if you ask me. And that's the perfect philosophy to have when your wife believes the exact opposite. But the last I checked, I'm the one that does the baking. To be fair, she recently made cookies for the first time in the nearly ten years I've known her, and they were crunchy. But I wasn't feeling well, and I think she felt bad. I also may have provided the recipe.

The thing with a crunchy cookie, aside from having the best texture, is less moisture. Cookies with less moisture will keep for longer, which means I won't feel the pressure to eat them all up within a few days before they lose all flavor and texture.

The other benefit to biscotti, especially this time of year, is that their ability to keep well makes them suitable for gifting. I like knowing that the recipient won't feel pressured to eat a ton of cookies within a couple of days, especially when there are already so many sweets available around the holidays. I've read that biscotti will keep well anywhere from two weeks to a month, though mine are usually eaten within a week or so.

From a baker’s perspective, the best part of biscotti is that they are so simple to flavor. You can use the base recipe to customize the cookies however you – or perhaps your recipient, if you feel like sharing – would like.

The flavor of this biscotti recipe is cherry and limoncello. I incorporate dried cherries, lemon zest, and limoncello into the biscotti batter to achieve a sweet-tart flavor. I like the bright burst of limoncello and knew it would work well in this cookie.

If you’re hesitant about using limoncello, don’t worry, the flavor in the biscotti is mild and doesn’t taste of alcohol. On the other hand, if you want a little more punch, you can make the optional limoncello icing for the full lemon experience.

The ingredients for making these cherry limoncello biscotti are relatively straightforward. The one thing I suggest is not to use an expensive bottle of limoncello unless you also plan to drink it. I found Fabrizia limoncello to be reasonably priced and delicious for sipping. I recommend it if you can find a bottle.

If you'd rather not use limoncello, I have a note about that under substitutions below.

Here are all of the ingredients you will need:

Start by using a mixer to cream the butter and sugar. Then incorporate the eggs, limoncello, lemon zest, and remaining ingredients.

Eventually, when combined, dump your dough out onto a floured surface. It'll be on the wet side, so incorporate additional flour until it is no longer sticky.

To make things easier, roll the dough out on a floured piece of parchment paper to prevent sticking to your counter.

Don't forget to add in the cherries! Stir or fold them into your dough.

Shape the dough into two rectangles that are about 8x3 inches. Then bake in a 325degree oven for 25-30 minutes or until golden brown.

After baking, let cool briefly and then slice at an angle into ½ inch pieces.

Now bake the biscotti for a second time for another 25 minutes. Then cool before icing or storing.

Limoncello - If you don't have, or don't want to use, limoncello in your biscotti you can substitute an equal amount of lemon juice in its place. Though it will have a more mild flavor, so maybe add some more lemon zest to the mix.
Dried cherries - Try dried cranberries, blueberries, or even raisins in place of the cherries.

I suggest starting with the limoncello biscotti recipe as written. Once you've had luck with it and want to change up the flavor, omit the cherries, lemon zest, and limoncello. Use any nuts, dried fruit, chocolate, liquor, extract, or zest you may prefer in similar quantities.

Note: If you use less or no liquid in your variation, slightly reduce the flour (by about ¼ cup) to compensate.

Store these cherry limoncello biscotti in an airtight container and enjoy them within a couple of weeks.

Since we're adding a decent amount of liquid to the biscotti in the form of the limoncello, the dough is going to be soft. You want to add enough flour to keep it soft, but not sticky. So if you've used the amount of flour I've suggested, and it's still sticky, continue to add a little more until the dough is smooth and easy to handle.

These cherry limoncello biscotti are sweet, tart, and crispy thanks to limoncello, fresh lemon zest, and plenty of dried cherries. A perfect snack for your afternoon cup of coffee or tea.

For the optional icing:

Roll the dough out on a piece of floured parchment paper to make it easier.

For an alcohol free version, use lemon juice in place of limoncello.