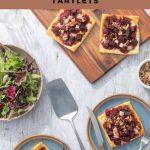 A tasty beetroot and feta tartlet recipe made with puff pastry and flavored with thyme, onions, and honey. Makes a great appetizer or light meal.

I have quite a few appetizer ideas stashed away for whenever parties are a thing again. But there's no reason why these recipes can't also be made into meals.

One of those recipes is beetroot and feta tartlets. I made them for a holiday get-together a few years ago and loved the combo of sweet earthy beets, salty feta cheese, and savory onions and thyme.

Instead of waiting for another special occasion to make the recipe, I changed it up a bit and made it into dinner. With a salad, it's a meal. Anything becomes a meal when you add a salad on the side, right?

If you feel you need something more substantial though, you could pair this beet tart with my Broiled Shrimp and Citrus Salad for some protein, or maybe this Coronation Chicken Salad. On the other hand, another appetizer that could also be made into a meal is the Butternut and Sage Crostini.

Here's everything you'll need to make these beet and feta tartlets.

What I like about this recipe is that there is a ton of flavor but not a ton of ingredients. Though you'll want to be sure to use quality feta. I love Maplebrook Farm feta from right here in Vermont. It's creamy, flavorful, and melts beautifully.

Most beet tart recipes use goat's cheese instead of feta. But personally, I prefer feta for its salty briny flavor. Too often I find that goat's cheese can overpower the other flavors in a dish.

And we wouldn't want to overpower the beets, right? Of course, good-quality beets are key. We're making beetroot and feta tartlets, after all. Look for beets that are firm and small to medium in size. Larger beets tend to be less tender and flavorful. But hey, if that's all you've got, go for it.

In addition to feta and beetroot, you'll need:

You're going to kick off this recipe by thinly slicing the onions and cooking them in olive oil. These aren't full-on caramelized onions, (because there's a big debate about that, you know) but they're pretty close. That means, they're going to need as much time as possible to cook to reach that near jam consistency. I could just eat them on plain toast, they’re that good. But I can’t stop the recipe here.

Next, peel and cut up those beets because we're going to give them a quick steam. Your hands may turn a bit red in the peeling process, but you'll live.

Many recipes suggest roasting the beets before you put them on the tart. While I love roasted beets, roasting takes a bit of time. And isn't it odd to roast the beets a second time while they cook on the tart? I don't know about you, but I've got other things to do than double roast my beets.

So we'll put them in a steamer basket and let the beets steam for about 15 minutes until tender. They'll finish cooking right on top of the tart.

Tip: Make sure to use a sharp knife when slicing beets. It makes the job a lot easier.

Meanwhile, cut up your feta. I like to do small cubes about the same size as the beets. Give the walnuts a quick chop while you're at it. About now, you'll want to stir those onions, add some salt, and put the cover on to keep cooking. Towards the end, you'll flavor them with a splash of balsamic vinegar.

After the onions have cooked about 30 minutes total and the beets have steamed for 15, you're about ready to assemble the tarts.

Cut the puff pastry into squares. A typical box has two sheets and I get six squares from each sheet. I don't bother to roll these out at all. Brush the squares with some melted butter and then start topping.

Layer on the onions, then the beets, then the feta, and finally the walnuts, thyme, honey, and pepper. They're now ready for the oven.

Store leftover beetroot and feta tartlets in the fridge for up to three days. Reheat in the oven until hot before serving.

How do I make these beet tarts into an appetizer?

As written, the recipe aims for 12 squares, with 2 per person as a meal-sized portion. To make them more appetizer friendly, simply cut the squares in half diagonally for 24 pieces.

Can I make these tartlets ahead?

Yes! You can prepare everything a day or two ahead right up until the baking step. But I'd wait to bake until you're about ready to serve.

Can't I just cut the tart up after baking?

You could. But I don't suggest you do. I've tried that approach and the beets and other toppings fell off in the process. It also didn't look as nice.

What the heck is beetroot?

It's the same as what we call a beet in America. Beetroot is the name more commonly used in England, which is where I like to imagine living. The Lake District, Cotswolds, or Cornwall would all do in case anyone reading wants to invite me for an extended vacation. Happy to cook for you in exchange.

A tasty beetroot and feta tartlet recipe made with puff pastry and flavored with thyme, onions, and honey. Makes a great appetizer or light meal.

The feta tends to add some saltiness to the tartlets, but feel free to add additional salt to taste after baking.

To make these more appropriately appetizer-sized, cut each square into two triangles for a total of 24 pieces.