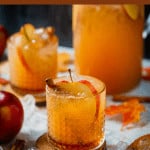 This Apple Cider Bourbon Cocktail is a simple and refreshing iced drink with all the flavors of fall in a glass.

The leaves are turning, the apples are falling and the mums are blooming. Cue the decorative gourds. That's right, fall is here folks.

When the weather starts to cool, we start to think about hot drinks. Hot chocolate, mulled wine, hot toddies and warm spiced cider come to mind. I enjoy those as much as the next guy, but not just yet. I need to be eased into this transitional season, which, let's be honest, is merely an all too brief descent into the dark cold depths of winter. Just last week I was at a beach on Cape Cod enjoying summer. Now, I'm cringing thinking about how the first snowfall is likely just a few weeks away. And don't forget, it will soon be dark by four in the afternoon.

Maybe, like me, you're not quite ready to trade in the refreshing nature of summer for the warm comfort of a pumpkin spice latte. In which case, I think I can help. How about a drink that is cold, refreshing, and yet somehow also comforting thanks to a few of those classic fall flavors? Meet the Apple Cider Bourbon Cocktail.

I start this cocktail with fresh apple cider. I know many people prefer to drink cider warmed and infused with cinnamon and cloves. Not me. At least, not yet. There's something about a glass of super cold apple cider that I find extremely satisfying. I feel like you can get the true earthy taste of the apples when it’s cold.

Did you know apple cider is simply the unfiltered liquid from crushed apples? If you’ve ever bought apple cider, you’ll know that it doesn't last long and will start to ferment after a week or so. But it's also why it has that incredibly fresh taste. Apple juice in stores, on the other hand, is the filtered and processed version, and it usually has added sugar. And then, what we call hard cider in the US, is a carbonated alcoholic cider.

I think the cider options can get a little confusing, especially because the apple cider and apple juice labels are used interchangeably by some of the large beverage brands, even though they are incredibly different products. When in doubt, look for the option from a local orchard. At the end of the day, it's the real deal and will have the truest apple flavor.

On a side note, I found it interesting to learn that apple cider is the state beverage of New Hampshire. That was after learning that states have beverages, though there are only about 30 states that do. Oddly, more than half of these state beverages are milk, including here in Vermont. It begs the question: what's the point? And is New Hampshire known for its apples? If so, that's news to me, too.

Alright, back to the cocktail. To make this drink we now need bourbon. Apple cider and bourbon is a classic pairing. But maybe you've only thought about combing them when making warm spiced cider. Whether hot or cold, the caramel and vanilla notes commonly found in bourbon are an apple's best friend. Just think of apple pie.

As for what bourbon to use? I tend to go for mid-shelf liquors because they're affordable and taste better than the cheap stuff. That's just my philosophy though, and I'm sure it's flawed. If you're new to bourbon, read the labels and find one that works for your budget and has flavors that would pair well with apple. As with anything, the taste will vary from one bourbon to the next.

Next up, you'll need lemon juice for a bit of tartness and an equal amount of maple syrup for sweetness. The maple syrup may be unnecessary since there's already sweetness in the cider. But for me, cocktails are about indulging. Whether or not you want to include it is up to you.

To make this Apple Cider Bourbon Cocktail, I combine all of the ingredients in a glass with ice and stir to combine. I'm not sure we should waste any more time on unnecessarily complicated instructions for what amounts to simply stirring liquids in a glass with ice. You got this.

Cinnamon sugar rim - Speaking of indulging, why not add a cinnamon sugar rim to your glass? It's easy enough to do, yet makes things look fancy. Simply mix a little cinnamon and sugar on a plate, wet the rim of your glass, and then roll it in the mixture to adhere it to the outside of the glass. It's what you'll get when ordering a pumpkin beer from many restaurants and bars time of year. Looks fancy, but it's not

Soda water - You can also lighten the drink up a bit by topping it off with soda water or seltzer. Cider and bourbon can feel heavy. If you want to lighten things up and lean on the refreshing side of things, the soda water can help. It's also a way to stretch this drink out if you want to make a pitcher to serve your flannel-clad friends while you gather around a bonfire.

If creative cocktails and drinks are your kind of thing, check out my recipes for Creamy Carrot Cocktail, Hot Buttered Rum, and Homemade Irish Cream.

This Apple Cider Bourbon Cocktail is a simple and refreshing iced drink with all the flavors of fall in a glass.

Add the apple cider, bourbon, lemon juice, and maple syrup to a glass. Fill with ice and stir to combine. For a lighter beverage, add 4-6 ounces of soda water. Garnish with cinnamon sticks and apple slices and serve immediately.